A STORY OF SUSTAINABLE CHANGE IN SERBIA

How government and civil society can join forces against child labour

“Sometimes I did have something to eat, and sometimes I didn’t.
That was the reason I was working in the street.”

It is estimated that 10% of children aged 5 to 17 years are involved in child labour in Serbia. Children outside of cities, especially from the poorest areas, are more likely to be trapped in the vicious cycle of financial instability. They feel a pressing need to work harder for longer hours to make ends meet.

Children from the Roma community, a minority ethnic group in Serbia, are particularly vulnerable to child labour. They are often seen engaging in street work in urban areas, risking their life, health, and proper growth and development.

According to the Strategy for social inclusion of Roma in Serbia, children who live in poverty are more likely to drop out of school. Consequently, they are also more likely to be unemployed later in life.

This is the story of a sustainable change that is still in progress. Government and civil society stakeholders, including social partners and NGOs, are banding together to end child labour in Serbia for good. Here’s how they’re doing it, one step at a time.

Boško is quick with a smile. He seems at once sure of himself and self-conscious. One of the middle children in a large family, Boško, who belongs to the Roma community, lives in Belgrade with his brother, two out of his four sisters, and his parents. The family home contains two rooms: one large one, and one small one. The small one is the bathroom. (There’s no television.)

The rest of his family lives in houses very close by; his father’s aunt, his grandfather. There’s a decently-sized yard in the front, where he used to play a lot with his siblings and other kids from the neighborhood. A small park nearby was another frequent favourite.

The city where he has lived for his entire life, he says, has recently become a more beautiful place. But he can’t put his finger on exactly why he feels that way. 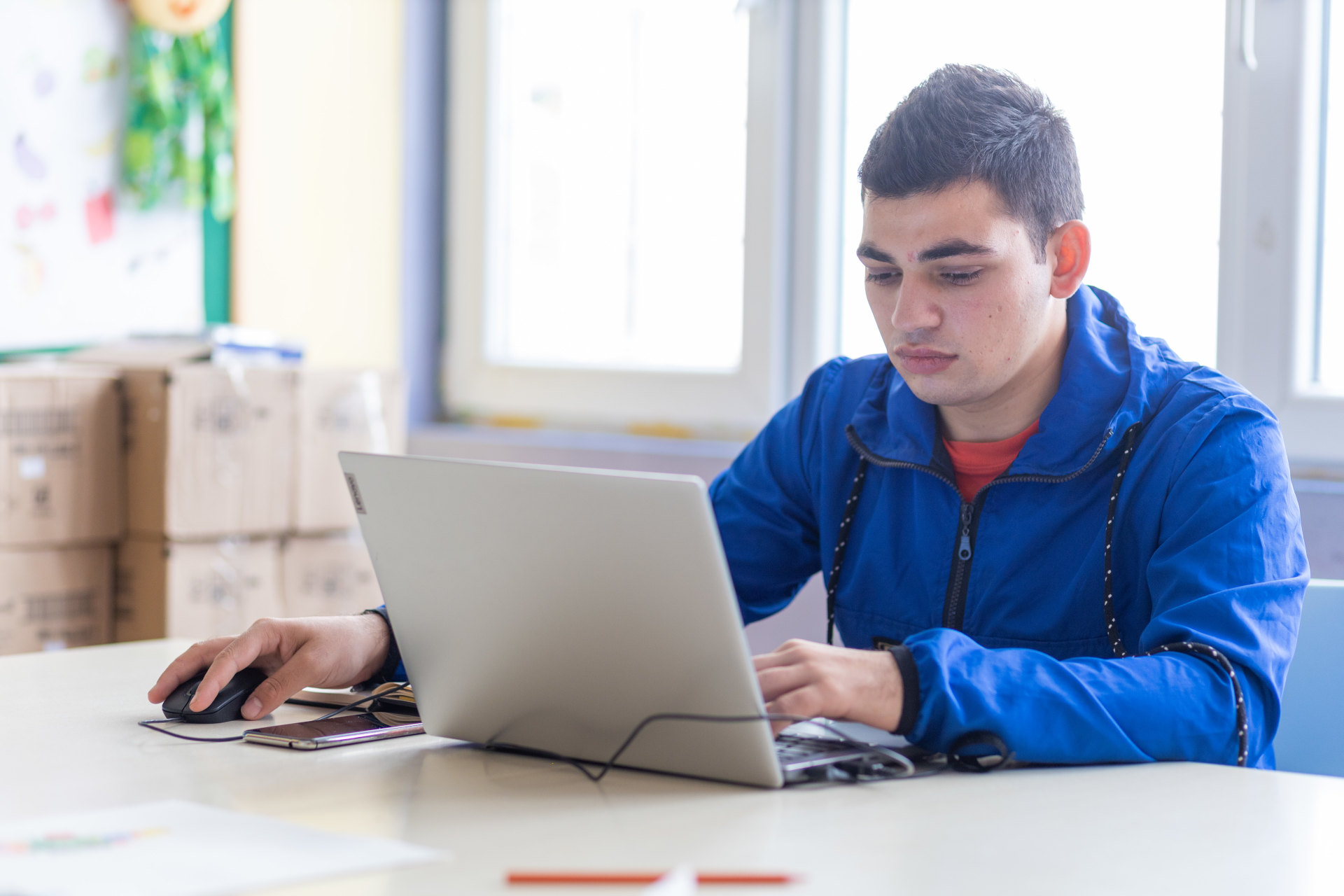 Boško needed food. That’s why he used to sell paper tissues, the ones that come in little pocket-sized packages, to cars stopped at traffic lights.

Starting from when he was 6 years old – an age when most of his peers were learning multiplication and division, becoming more athletically coordinated, and developing their self-identity – he worked from sunrise to sundown, from 8 a.m. to 10 p.m. But it wasn’t always enough.

“I felt very awkward because my classmates used to see me there. My teachers, too.”

But, after the local centre for social work got involved, he accepted the help.

“After three days I decided to go there. And I was clear with myself: if I like it I’ll stay, if I don’t I just won’t go anymore. Well, the first day was great. I hung out with other kids, watched cartoons, talked to the tutors and the volunteers. I really liked it. I started to go to the drop-in shelter almost every day.” – Boško.

He had access to a shower. He could ask for help with anything, even personal matters, from people he could trust. He got help getting back into school.

He found friends, study partners, and, all in all, a safe place to dream of a better future.

A PATCHWORK OF CHANGE-MAKERS

In Serbia’s largest city, some children still work. They do things like sing on public transportation, rummage through garbage bins for things to sell, and peddle their haul to car drivers stalled at stop lights.

Outside of the city, child labour is common in the agriculture sector. According to the 2018 ILO Rapid Assessment on Child Labour in Agriculture , almost one third of children surveyed were involved in child labor in agriculture during the peak season for such work.

Both street begging and certain types of agricultural work are hazardous to children’s physical health and well-being. Representatives from ministries, social partners, and members of a working group established by the ministry of labour are currently revising the decree on hazardous child labour to include working in streets and begging. This way, the country will be better positioned to help children in situations like Boško’s.

Poverty is one of Serbia’s biggest barriers to ending child labour. Stakeholders are focusing on two key ways to overcome it: increasing access to education and preventing dropout from school.

“We help them finish primary school, enter vocational training, and find a job – the only way to end the circle of poverty.”

HOW AN NGO IS HELPING

Marko Tošić’s enthusiasm is clear, even through an online video chat. He has an attitude that you might not expect from someone who works with disadvantaged youth: bright, optimistic, talkative.

Marko is the Executive Director of the Center for Youth Integration, an NGO that works with at-risk children and their families in urban Belgrade. Its mission is to create a more inclusive society by improving the mechanisms that increase social equality and protection for all children. 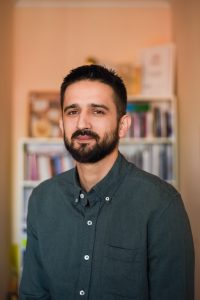 Between 70 and 100 children and teenagers visit the Center for Youth Integration’s drop-in shelters every day, which offer everything from preschool education to job placement services. Marko met Boško almost 10 years ago, when he was still selling paper tissues in the street. 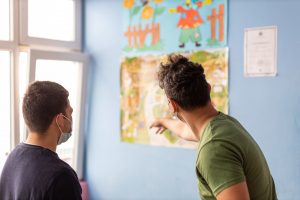 The Center for Youth Integration also invites partners in the community to jointly organize activities for at-risk children. Comtrade, a local employer, offered a computer workshop and later provided the scholarship that allowed Boško to enroll in an information technology university.

Sanja Kljajic works at the Social Protection Institute in Serbia, a government institution, where she coordinates and collects data on child labour. She also supervises all the centres for social work in Serbia, more than 150 in total, which address not only child labour but also issues like family violence.

These centres for social work play a key role by identifying child victims and intervening in the worst cases: talking to the child’s parents, taking measures to remove the child from violent situations, or involving prosecution.

While the NGO’s drop-in shelters provide children with food, showers, and a safe place to stay and study, the government’s centres for social work provide families with services like counseling and financial and legal support. The two entities work together to remove children from child labour.

“There has been a drastic change in the past few years. There’s a new focus on child labour.”

Sanja has seen major shifts in the past few years, including when the government:

The CLEAR project, which began in 2015, was one of the first catalysts for change on a national level. The project, funded by the United States Department of Labor and implemented by the International Labour Organization, aimed to support countries working to eliminate the worst forms of child labour in 10 countries, including Serbia.

That positive collaboration continues today in the context of the MAP16 project, through a network of practitioners and decision makers.

“These are huge improvements, huge steps,” she said.

She and her colleagues are also supporting the implementation of the roadmap to eliminate child labour and educating social workers about how to identify and address the different types of child labour. So far, 170 professionals in the centres for social work have completed voluntary training on child labour.

“I like to talk to people. I also like to help people. I feel great when I see people cheerful and smiling.”

DREAMS FOR A BRIGHTER FUTURE

Today, Boško starts his day around 7 a.m. He wakes up at home, but then goes straight to the drop-in shelter, where he can shower, study, and eat before work starts at noon.

Boško sells home appliances at an electronics store. His job is to advise people and help them find the right high-tech device for their home.Although he’s only been working there for three months, he sees this job as an opportunity to build a career.

He works until 6 p.m. and, afterward, he either goes home or hangs out with his friends. They do what 18-year-olds do: walk around, listen to music, go see a movie, or just sit down and talk at their favorite cafe.

Boško is currently a freshman at the local information technology university – a feat made possible by his relationship with the Center for Youth Integration. So far, he has realized that, in addition to programming, he also likes web design, photography, and video editing – interests sparked by the workshops he completed at the drop-in shelter.

He remembers the time he took part in a film workshop and saw a glimpse of a possible future for himself, one that didn’t involve selling anything on a street corner.

“I think I’ve changed a lot as a person, and my family changed, too. I’d say that my whole world has changed. I met new people, good people, who helped me finish school.”

Government-civil society cooperation helps children like Boško get off the streets and back into school, followed by a good job with decent working hours. Projects like CLEAR and MAP16 have helped to create a stronger foundation, keep this coordination and progress moving forward, and ensure that the “next Boško” does not need to wait 10 years for help.

In the future, Boško would like to become a videographer or a filmmaker.

“I wish all the best for those kids who work on the streets. They shouldn’t be there. They need a place to shower, eat, study, play. They need help to have a normal life.”

Funding for this story is provided by the United States Department of Labor under cooperative agreement number IL‐30147‐16‐75‐K‐11. One hundred per cent of the total costs of the MAP16 project are financed with federal funds, for a total of USD 22,400,000.

This material does not necessarily reflect the views or policies of the United States Department of Labor, nor does mention of trade names, commercial products, or organizations imply endorsement by the United States Government.